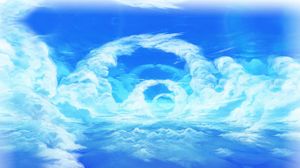 Skyworld (天空界 Tenkū-kai) is one of the three major worlds that appear in the Kid Icarus series. It exists above the Overworld, thus it is also referred to as "the heavens". It is home to numerous divine beings including the main protagonist Pit and the goddess Palutena.

In Kid Icarus, Skyworld is the third level. It is a vertical level, much like the Underworld, and Pit can expect many of the same attack patterns from the foes encountered here. Komaytos can be found here and Pit needs to be careful that none of his weaponry is stolen by a Pluton Fly. Pit must be ready for the Palace in the Sky when he clears the Fortress, as there are no chambers in the last stage.

This area is generally composed of tricky jumps and lots of fall-through clouds.

The Hot Springs right after leaving the Overworld's Fortress is very welcome; by now, Pit has likely obtained and activated all of his special weapons. This is a relatively short area and can be passed through within several minutes, but is not without some very hazardous jumps. A new hazard shows up here, a stationary red sphere with yellow lines; these act like thorns if touched. If Pit's been slaying many enemies, he'll probably get his last Arrow of Strength here.

3D Classic: Pit travels upward, amongst the purple cloud layers. As he climbs higher, the clouds will part to reveal stone towers.

3D Classic: Pit quickly ascends above the clouds into the starry sky above, with only floating islands as a backdrop.

Komaytos and Shemums immediately descend to attack Pit, then he must navigate red spheres on moving platforms before finding the first stable footing. From there, the climb is fairly easy, compared to previous areas, with large cloud platforms. Pit can also make good use of his Sacred Bow, being able to snipe Reapers from long range, out of their sight range.

Eggplant Wizards have taken up sneakier positions and Pit can be cursed within a second of entering a room if he's not careful or lucky. There are two Hot Springs here to help recover health.

There is a "fake" pre-boss chamber towards the upper left side. From there, Pit must proceed left, up, and straight to the right corner to face Pandora. However, it's very easy to get cursed by a pair of wizards early on the way and Pit must abandon the boss run to get cured if this happens.

This is a relatively easy intro into the Sky World Tower. This area consists mostly of small platforms, some of which are moving. The second half of the stage consists of fiery pits and icy platforms, and Octus appears to harass Pit.

This stage starts off foreboding, with dark blocks, fiery pits, and Centurion statues everywhere. However, it won't take long to ascend into frosty plateaus and stacks of thorns. There's a Hot Spring hidden behind a fairly obvious pillar once Pit reaches the cloud platforms. The end of the stage returns to the dark architecture, and Pit will have to navigate over fiery pits on small stone platforms.

The third stage of the Sky World Tower starts off with Pit needing to make large leaps over fiery pits (though breaking through two layers of wall in the pit above the starting point will yield a Hot Springs). This stage will be a great challenge to the angel, as he must gather all of his platforming skills to navigate the rows of thorns, moving platforms, and fire pits. About halfway up, the scenery becomes a lot more standard, consisting of clouds and columns, and patrolled by Mercs. Once Pit starts seeing brick, he's very close to the exit.

The Fortress isn't too much different than previous ones, but with one twist; Pit will need to succumb to the Eggplant Curse in order to get to the end. With both a Nurse and Hot Springs close by the Guardian's chamber, Pit will be fully prepared for the Fire Serpent. 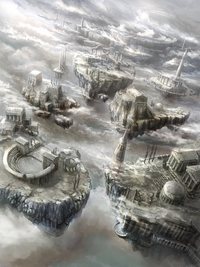 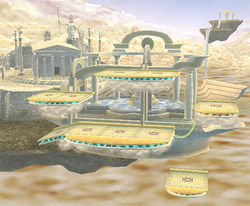 Skyworld makes an appearance in the fighting game Super Smash Bros. Brawl as a stage. Four pieces of music from Kid Icarus are playable here, as well as others. This stage features breakable platforms held up by clouds that can be destroyed if they are struck with enough force, as well as another platform at the bottom of the stage that scrolls back and forth from time to time. Players are able to fall through the clouds. The stage features Greek-style temples and a large statue of Palutena in the background.

The second level of Super Smash Bros. Brawl's story mode, The Subspace Emissary, is also named "Skyworld", and features Pit as a selectable character, alongside Mario.

The Skyworld stage from Brawl appears in Super Smash Bros. for Wii U as a returning stage.

The Skyworld stage from Brawl appears in Super Smash Bros. Ultimate as a returning stage.