Pit begins his adventure, starting in the Underworld.

The Underworld, known in Japan as Hades World (冥府界 Meifukai) is recurring area in the Kid Icarus series. In Kid Icarus it is a natural vertical maze, ultimately opening to the Overworld. It's a dank, dark area filled with evil monsters. These monsters are allies to Medusa, who was banished here by Palutena. Staging a coup from here, Medusa started her ultimately successful invasion of Angel Land and installed herself as ruler of the Palace in the Sky.

The Underworld boasts a large number of threats and navigation hazards. Pit can expect to find moving platforms, thorny growths in the walls, and small pools of lava that can inflict major damage quickly. Platforms will typically be small and Pit must be careful to avoid stepping off a platform as he lands. The area also sports ice that Pit can fall through and will cause him to slide from momentum.

The Underworld area "wraps around" from one side to another, though the first and second adventure handle it differently.

Having just escaped from his dungeon cell, Pit must evade the monsters here and gain access to the Overworld by defeating Twinbellows in the Fortress. This is a vertical series of stages.

Since this is a up-scrolling stage, Pit will die if he falls below the bottom of the screen. An Angel's Feather can help to avoid this fate, but can be difficult to obtain this early. If Pit moves off one side, he'll reappear on the other side; clever use of this ability allows for different tactics when moving and attacking, but it's (almost) never necessary to use this. 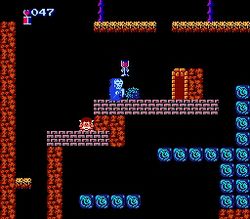 Pit goes through the first stage of the Underworld.

Here's where Pit's daring escape from the dungeons begin, and it's not an easy trip. Though this area begins with long, flat platforms, it quickly becomes a tricky jumping gauntlet and Pit's foes are uncompromising.

3D Classic: Pit starts at the bottom of a lava flow, overshadowed by a large mountain. 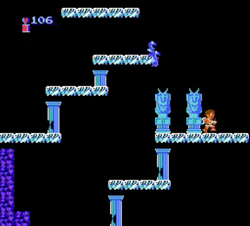 Pit slides on some ice platforms.

The level starts out as the previous level, which long platforms. However, climbing is a bigger focus here. The ice platforms are introduced early here and are located throughout the level. If Pit has been vigilant about slaying monsters, he'll likely get his first Arrow of Strength here.

3D Classic: A polar opposite to the last area, icy pillars extend vertically through this stage. Both the beginning and end are marked with bright ice blocks.

The stage starts similarly to the first one. Lava pits are noticeably present in the level itself (and oddly, harmless candles in the background as well). All of the enemies from the past stage make a return. McGoos are out in force, especially around the first lava area, and Pit will need to be fleet-footed to avoid getting burned. This stage also has a new hazard; thorns. These spiky branches will hurt Pit if he brushes against them. Pit will experience both cramped platforming (while battling Octos) and difficult jumping with moving platforms.

The fortress level of the Underworld. Pit must be on guard for spike traps and lava beds, but the platforming is relatively easy compared to 1-3. This is the easiest Fortress by far, so it's a good place for Pit to practice for the future. Twinbellows awaits Pit in the southeastern corner.

Pit starts through this area on his path to earn the strength to use the Three Sacred Treasures. This area doesn't have a clear "wrap around" border. Pit will smoothly transition horizontally and is indeed necessary for continuing.

Pit will encounter only a few basic foes here as he leaves on his journey to become worthy of the Three Sacred Treasures. He'll also get his first taste of platform jumping and avoiding spiky thorns.

Pit will get his first encounter with icy platforms in the level of the tower and an increased amount of thorns. The Reaper makes an initial appearance, too.

The platforming gets trickier here with many single-block landings. Pit must be careful when navigating around thorns. There's a secret chamber right above the entrance; hitting the wall with hammers will reveal a Hot Springs guarded by Totems. Jumping into the water will instantly vaporize the Totems.

The first Fortress consists of 25 rooms, arranged in a heart-like labyrinth. The Minotaur guards the Sacred Casket which holds the sacred treasure here. This Fortress will be an easy jaunt compared to those that Pit will have to travel through later, so he'd do well to learn the ways of the Fortress.

The Underworld makes a return here, but appears significantly less frequently. Even though mentioned quite a few times in dialogues, Pit enters the Underworld only three times; in Chapter 9, Medusa's Final Battle, Chapter 23, Lord of the Underworld and Chapter 25, The War's End, although the latter only features the Underworld for the first half.