The Eggplant Wizard (ナスビ使い Nasubi Tsukai) is an Underworld soldier debuting in Kid Icarus. It is known for its ability to throw eggplants, which turn Pit into an Eggplant himself if it connects with him.

The Eggplant Wizard is perhaps a vegetative creature, like Holer and Daphne. Tall, cloaked, and wielding a staff, it's an imposing magic-user, but they are not agile by any means. Like many other creatures in Angel Land, the Wizard has a single, large eye. As one of the few Underworld creatures that is capable of utilizing magic attacks, this enemy is widely known for the mystical eggplant talisman hanging from its staff. Unusual to most weapon-wielders of this type, the Eggplant Wizard actually holds this staff with its left hand, although it still uses its right hand to launch its magical attacks. Even at close range, the monster can still put up a challenging fight by using its staff for melee combat. It is these dangerous qualities that make Eggplant Wizards such high-ranking members of Medusa's army, and are therefore often assigned to guard valuable locations such as fortresses.

In the first Kid Icarus, Eggplant Wizards guard Fortresses, becoming more numerous with each subsequent fortress, and often in deadly pairs. When Pit enters a room that they occupy, they will cast their eggplants in either high or low arcs. The duo will both throw in the same way and walking out of the room and back into it will most likely change the arc style. If Pit is hit by an eggplant, he turns into one, taking minor damage.

An inhabitant of the fortresses. It places a spell on Pit turn him into an eggplant. In order to break the spell, Pit must go to the fortress hospital. 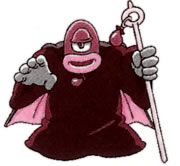 Artwork for Of Myths and Monsters

Eggplant Wizards return in Kid Icarus: Of Myths and Monsters, acting the same as they did in the first game. Fortress bosses won't appear in their chambers if Pit's been cursed. Being cursed comes with one small advantage; since Pit is now at a reduced size, he can run underneath enclosures that he normally wouldn't be able to fit through.

Eggplant Wizards return in Kid Icarus: Uprising as an uncommon enemy on grounded segments. Similar to previous appearances, the Eggplant Wizard will throw eggplants in an arching shot that explode in a magical cloud on contact with the ground; both the cloud and the eggplant itself will transform Pit, but being hit with the eggplant directly will inflict damage as well. When Pit is turned into an eggplant, he cannot use weapons, but can still run and dodge. Unlike the previous games, the eggplant effects will vanish after a period of time, or if the Effect Recovery Power is equipped, it can be used to return to normal immediately. When fighting Pit, the Eggplant Wizard teleports out of Pit's reach (usually leaving an eggplant behind as a trap), making melee attacks difficult to use against him.

The Eggplant Bomb item appears in Together Mode, letting players wield the power of the Eggplant Wizard.

Those hit by eggplants thrown by the Eggplant Wizard are turned into, well, eggplants. Pit can't attack in this state, and the only cure is time. So you'd best vamoose if you don't want to end up baba ghanoush.

In Captain N: The Game Master, an Eggplant Wizard is one of Mother Brain's lieutenants, next to King Hippo from Punch-Out!! He would immediately spout fruit and vegetables when agitated or hurt, and often used them for outlandish purposes (such as a banana phone).

Eggplant Wizards appear as enemies in the Kid Icarus challenge of NES Remix 2.