Bluster (クラウタン Kurautan) is a new enemy introduced in Kid Icarus: Uprising. This strange monster resembles a flying sheep's head with big lips. The Bluster is a very tough Underworld foe, as it can unleash a quick-moving projectile attack that can cause the shaking status effect. It also produces cloud-like puffs around its body that it can launch as a secondary attack. There is also a cellular version found in Lord of the Underworld. The Cellular Bluster acts the same as the regular one, but it's body is shiny and the clouds around it are blue and green. 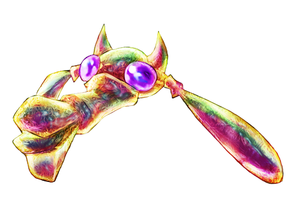 Blusters are very rare enemies first encountered during Pandora's Labyrinth of Deceit. Despite being capable of flight, they are never seen during aerial missions.

Cellular Blusters (ク細胞 Ku Saibou) are very rare enemies, and only one is encountered in the land section of Lord of the Underworld.

Bluster
Bluster covers itself in a cloud-like material for protection. It favours defense, using its attacks to cause shaking in enemies, which in turn leaves them vulnerable to damage from Bluster's allies.
Cellular Bluster
This cellular version of the Underworld Bluster guards Hades's belly from intruders. While most cells spend all day processing nutrients and dividing, Cellular Bluster shields itself with an ever-growing layer of gelatin.