McGoo (マグー Magū), known as Spitball Blob in Kid Icarus: Of Myths and Monsters, and Magmoo in Kid Icarus: Uprising, is a recurring Underworld enemy in the Kid Icarus series.

It is monster made of magma, animated by the evil power of Medusa. It's relatively large for a gout of molten rock with a pair of hateful yellow eyes and a spout for ejecting magma at encroaching angels. They are one of the few enemies capable of burrowing, and are able to seep through any solid surfaces with relative ease. This allows McGoos to appear unexpectedly and surprise their foes in a way that most other Underworld monsters wouldn't even dream of. 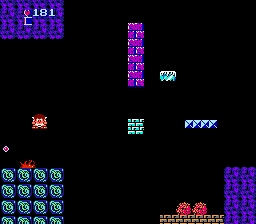 A McGoo retreating after attacking

As burrowing enemies, McGoos appear unexpectedly from beneath the platforms during the Underworld levels of the game. They are capable of spitting out flaming projectiles in one direction, however they cannot move from their spot while doing so. They appear in the wake of Pit's footsteps, quickly appearing and launching a fireball, then burrowing back into the ground. As such, it's very hard to launch a counterattack, though a watchful Pit can see them form shortly before they congeal enough to let loose the fireball. Pit can crouch under the fireballs to avoid them.

A blob of magma that lives in the ground. It's been given the soul of Medusa. It seeps out of the ground at Pit's feet.

It's called the Spitball Blob here and it's a little bit slower on the draw.

Materializes from inside the floor Pit is standing on to attack the unsuspecting Pit.

The newly renamed Magmoo is a monster that usually only appears in hot environments, such as the Phoenix Mountain in The Wish Seed. Their attacks have the ability to burn Pit. The yellow arrow that appears above enemies can indicate their hidden position beneath the ground.

Semianimate creatures born from the magma of the Underworld. Their brains put out a continuous source of heat that keeps their magma piping hot. Lacking smarts, they sometimes stumble into water, which never goes well for them.

McGoos appear as enemies in the Kid Icarus challenge.