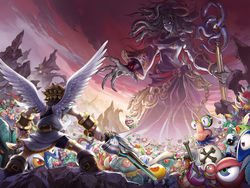 The Underworld Army is one of the major factions in Kid Icarus: Uprising, and also the antagonist army in the first two games. They are the main opponents of Palutena's Army, the Forces of Nature, and the humans. Led by Hades, who lends out his army to Medusa and Orcos, this group seeks to destroy the world and gather more souls for their leader.

The Underworld Army is composed of the Kid Icarus series most well known enemies such as the Eggplant Wizard, Monoeyes, Komaytos and other enemies in Kid Icarus, Of Myths and Monsters and mainly Uprising. The following lists the leader, the commanders, and troops that make up this demonic army:

The true master of the Underworld and it's army's leader, as revealed in Uprising, he reigns the Underworld in the shadows making Medusa do all the dirty work for a period of time. He is shown to be incredibly powerful and desires to take many souls as possible to expand his ever-growing army and also for consumption.

Medusa unknowingly serves Hades in the first and third Kid Icarus games as the puppet leader of the Underworld Army and also as the Queen of the Underworld. She is defeated by Pit both times he encounters her and later betrays Hades but is killed by him as seen in The War's End.

Thanatos (known as Tanatos in the first game) is the God of Death and a talented shape-shifter. He commands the Underworld army during an attack against Poseidon and later fights the Forces of Nature's leader Phosphora but is defeated and possibly killed. He also gets great health coverage, evil powers, and free soda for being God of Death, all according to Hades. He serves as second-in-command to both Medusa and Hades, guarding the key to the Underworld.

Pandora and her previous, more powerful form Amazon Pandora, is another commander of the Underworld Army. She is the guardian of the Mirror of Truth, Medusa's source for Underworld troops. As the Goddess of Disaster and Calamity, she attempted to create Dark Pit to be her servant but was defeated and killed by Pit and Dark Pit. Though she is later revived into her full goddess form, she is defeated again.

Hewdraw is a dragon-like serpent who appeared in both Kid Icarus and Kid Icarus: Uprising. He is a general of the Underworld who later gains another two heads to rule beside him. He (now referred to as they) is commonly described as Pit's nicest enemy, especially the Purple Head who was the original of the three.

Dark Lord Gaol used to be part of the same mercenary band as Magnus, but later was captured and forced to join the Underworld Army. She becomes a commander for the Underworld Army for a short amount of time, leading Underworld troops on the Overworld. After being defeated by Pit and broken from the curse, she rejoins Magnus and later helps Pit to test his strength in The Three Trials.

Twinbellows was first described as being the Underworlds faithful watch dog. He is a massive, over-grown beast with two heads that roar a lot, hence the name Twinbellows. Although unintelligent and without the ability to speak, he can still be considered as a commander, although he would rank at the bottom of the list.

Introduced in Kid Icarus: Of Myths and Monsters