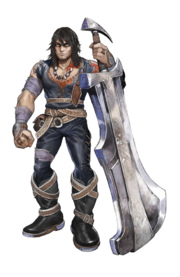 Humans are a race of mortals in the Kid Icarus series that reside in the Overworld. They are the primary targets of the strongly misanthropic Forces of Nature, and the sinister Underworld Army. Notable members of the human race are Magnus and Gaol.

Humans of the Kid Icarus series have much more mundane appearances compared to divine beings such as angels and gods. All humans seen so far have normal skin tones and hair color. Magnus however, does have yellow eyes, indicating humans can have exotic eye colors.

Due to their mortal status, humans are relatively weak and appear to have no innate magical abilities of their own. They are constantly observed struggling to fight off the Underworld troops with Magnus being the only exception.

The humans have a significantly smaller role in this game. A couple humans can be observed inside the artwork of the instruction booklet's prologue where they are first seen living peacefully in the Overworld, and then later being terrorized by Medusa. It is possible that the Nurse, Shopkeeper and Black Marketeer are also humans.

Humans are briefly mentioned in the instruction manual, but like the previous game, do not have a major role. It is possible that characters like Don, and the enemies, Merc and Pythagoras are humans.

The humans are first witnessed in Chapter 1, where Pit describes them cheering for the return of the goddess of light, Palutena. This is seen at the last moments of the air battle, where the angel briefly flies over the city, known as That First Town. An army of humans are next seen in Chapter 2, where they are seen battling the Underworld Army. Due to his limited flight, Pit is unable to help them and proceeds to Gaol's Castle to continue his mission. He eventually encounters Magnus, the most powerful human in the world, and the two decide to team up with each other to take down Dark Lord Gaol. After the boss fight, it is revealed Gaol is actually a human woman and a friend of Magnus.

In Chapter 11, the humans have fallen for Hades's lie of the Wish Seed. Whole nations are witnessed in total war. After all this occurs, Viridi makes her debut by throwing a nasty Reset Bomb on the soldiers. The aftermath left only the strongest and luckiest of men alive. This is the only time humans are seen up close that are not Magnus, Gaol, or the unnamed little girl.

Later on, in Chapter 18, Magnus mentions the humans by saying they now have to fight both the Underworld and Palutena's Centurions. The unnamed girl mentioned above also debuts here, being the first character Pit controls while inside the Ring of Chaos.

The final appearance of the humans is in the final chapter of the game. They are briefly heard after Pit defeats Hades.

While having a minor role at first glance, it is revealed that the humans themselves are the very source of the Underworld's continuous supply of troops. This, as Hades puts it, is unraveled by Palutena, Dark Pit and Viridi in Chapter 22. With the increase of deaths, the souls lost are used by the god of the Underworld to create more infernal soldiers. The abundance of souls is so vast that Hades doesn't even use them all, sending the weak ones as lunch for the Soul-Eating Monster, and only the strong ones are rewarded with peace after death. To increase the deaths, Hades purposely spread the myth of the Wish Seed, knowing the humans would go to war for it. This act was only the beginning of the Underworld Army's over-populating numbers.

Humans make an appearance in Thanatos Rising and Medusa's Revenge. In the former, an army of them is seen engaging in combat against Thanatos with a fleet of Trojan Horse-like war machines. However, they are quickly defeated by the god of death and are all forced to retreat. In Medusa's Revenge, a group of humans are observed fleeing in terror from Medusa's wrath.