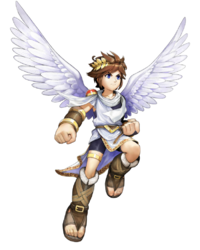 Angels are a race of divine spirits that act as messengers of the gods in the Kid Icarus series. The protagonist of the series, Pit, and his dark counterpart, are currently the only known members of this race. Overall, they seem to be a relatively uncommon race, as Palutena stated that not all gods have angels as servants[1].

Angels of the Kid Icarus series have a very similar appearance to angels commonly depicted in modern works of art and fiction. They are shown as winged humanoids with bird-like wings sprouting from their backs. They share some characteristics with humans such that angels (at least the ones seen so far) have normal skin and hair color. They also possess red blood like humans do.

Pit and Dark Pit both have the appearance of young adolescents, but there is implication angels do grow albeit it appears to be a much slower pace than humans. The official website for Kid Icarus: Uprising states that Pit is young[2], implying Pit is still merely a child in angel standards. There is further evidence that with the short, Medusa's Revenge, where Pit is clearly much younger in appearance than he is now. Regardless, angels with an adult-like appearance are yet to be seen in the series. It is also currently unknown if female angels exist as they have not appeared either.

With their wings, angels have the natural ability of flight. However, certain defects to their wings can disable them from being able to fly as observed with Pit. Angels do not seem to possess any innate magical abilities, but they can be granted powers by the gods. They also compensate with raw power, high versatility, nimbleness and amazing endurance. Angels are shown to be incredibly durable, or at least Pit is shown to be. He once fell from hundreds of feet from the air during his fight against Hades, and manages to survive it. The fall did hurt him quite badly, but within minutes he was able to stand right back up and fight again. Angels appear to possess great physical strength, as even Magnus, a human with Herculean strength, is impressed by Pit's power. Due to their divine status, angels are capable of using weapons and vehicles forged by the gods[3]. They can communicate telepathically with gods with the help of a laurel crown. Angels do have a weakness to fire, as stated by Palutena that angels are flammable like humans.

Angels supposedly give off some kind of holy aura that repels minor evil spirits, as evidenced in the Monoeye Idol description claiming that Pit is too divine for them to get too close. But this is not enough to save them from the Orne's deathly touch. Hot Springs can also heal angels, an ability humans do not have.

It is implied an angel's life force is contained within the wings. Thus severe damage to the wings can be fatal to an angel.