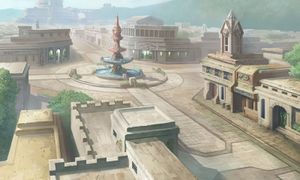 A human town in the Overworld.

The Overworld (地上界 Chijoukai, lit. "Land World") is one of the three major Worlds that appears in the Kid Icarus series. It exists between the Underworld and Skyworld, thus it is also referred to as the "earth". It is primarily inhabited by the humans of Angel Land.

The Overworld acts as the second primary stage after the Underworld.

This a long area and will introduce Pit to most of the enemies he'll encounter through the rest of the Overworld. While some areas have lava or watery pits, most of the landscape is fairly straightforward, making this more of a test of Pit's mettle and endurance rather than jumping prowess.

3D Classic: Here Pit must travel through Angel Land's highlands, against a backdrop of rolling hills, trees, and looming mountains. A thin layer of grass sits upon the landscape.

The second stretch of the Overworld is rocky, icy terrain, pretty much in that order. Pit must cross over vast, freezing lakes to reach the end. Much of the frost-covered ground is the kind that he can jump down from, but with only icy water beneath, so he must be careful where he crouches. This area contains many Enemy Lairs and is a good place for Pit to earn Hearts; even a moderately wealthy Pit will easily be able to max out at 999. A new enemy shows up here; the Pluton, just waiting to steal Pit's special weapons.

The Black Marketeer here deserves a special mention. He's planted in the middle of the stage, and, if Pit's been a diligent monster-hunter, the angel's probably collected around 600 Hearts halfway in this stage alone (there's roughly a thousand hearts total in this stage). If Pit is close to the limit of 999, he must buy something from the merchant to bring his total down (Angel's Feather would be a good choice, given the precarious platforming here). If Pit's Hearts reach 999, any additional heart collecting does not add to his Skill. There's an additional Black Marketeer at the end which serves a similar function, as Pit will have earned another 300-400 Hearts by this point; the first Store in 2-3 is about a third of the way into the stage, with around 250 more attainable hearts 'til then.

3D Classic: Pit travels the tundra of the Overworld against the setting sun, which slowly falls as he proceeds.

Pit may be clear of the icy terrain of the previous area, but now he must pass through rocky flatlands. This area contains nearly every environmental hazard thus far, such as lava pools, pits, thorns, and moving platforms with which they must be navigated. Halfway through the stage is a graveyard full of Plutons. Pit must be extremely careful here to avoid losing any of his special weapons; proceed slowly and dodge each one individually, it's nearly impossible to evade them all at once. Conveniently, there's a Black Marketeer just after the horde to sell Pit's weapons back to him. There's a series of tricky pillar-jumps right before the bridge leading to the exit, very careful jumps are required to pass.

3D Classic: Night has fallen on the Overworld and Pit travels in twilight, under a sea of stars.

A diligent Pit will likely have maxed out his life bar at the end of 2-3, and he'll need as much endurance as possible for this grueling fortress. This Fortress is crawling with Eggplant Wizards; luckily, there are two Hospitals. Spike traps are also a common threat.

The path to the boss is tricky, and starts in the lower left. From there, Pit must go up and around to the right (past a Hot Springs, thankfully), and back down. Hewdraw awaits in the lower right, next to a chamber above two Eggplant Wizards.

Pit's first stroll through the Overworld will be nice break from the dank of the previous Fortress. To make his quest easier, he can find a Hot Springs above the entrance to the Overworld, guarded by Totems. Two new hazards appear, fire pits and thorns, growing on walls. An Angel's Feather can also be found here.

Most of this area is covered in ice, and Pit will slide if he moves on it. Much of the surface area is fire, and more prevalent thorns make jumping risky. A Harp can be found here. As Don points out, there's a Hot Springs under the first Snake jar. An Angel's Feather is needed to reach the Sacred Chamber. Pit will also find his first Black Marketeer.

Pit's journey through the Overworld continues with more hazardous platforming. Fire pits cover most of the surface area, and Pit will have to navigate thorn mazes on moving platforms to advance and reach the Fortress. There's a Hot Springs halfway through the area, but it's hidden and takes a perfect jump to reach, just up and left of the Harp. There are a lot of Bat Chambers here, and Pit should avail himself of them to save up for the Black Marketeer here.

The sliding spikes from Kid Icarus' Fortresses make a return, albeit at a slower pace. Pit will also get a nasty surprise by breaking certain Centurion statues with a Hammer, as Fuzz Balls may be hidden in them. Eggplant Wizards have also taken to guarding Hot Springs here.