Dark Lord Gaol's Castle is a massive fortress introduced in Kid Icarus: Uprising that belongs to the terrifying Dark Lord Gaol. It is the main location of Magnus and the Dark Lord and is where both Magnus and Gaol are first encountered by Pit. According to Palutena, Gaol and her minions had "scrambled" to build the castle once they received word of Medusa's revival. Pit is assigned his mission to face and defeat Gaol because the castle acts as a portal between the Underworld and the surface world. Because of this, Gaol was going to use it to transport more troops to Medusa's army, and likely would have succeeded were it not for the human forces trying to contain her within her own castle. Consequently, the human armies fighting against the dark lord suffered many casualties, with Pit unable to help due to his limited flight.

Just outside of the castle is a massive wasteland that extends for miles in all directions. Sharp, pointed mountains are abundant, with polluted rivers flowing between them and pouring into deep, seemingly bottomless gorges. Aside from the Underworld monsters that infest the area, the only other signs of life are the human armies fighting against the aforementioned creatures under the bright moonlight and stars. Much higher up in the sky, numerous deadly thunderclouds can be seen.

The castle itself has been built at the center of a large fissure that lies on a plateau. It is only connected to the outside land by a single bridge, although Pit can simply fly straight into the building with little trouble. In addition, the castle is made up of many individual areas that will be explored as Pit advances.

The Great Hall, as named by Pit, is located at the very entrance of the castle. It has a red carpet leading to a pair of curving staircases that reach to the upper level. It also has a small bridge that crosses over the central area.

This courtyard lies directly after the Great Hall, and is surrounded by tall walls that have the only plant life seen for miles growing on them. It also has a small hall that leads to the lower level of the garden where Magnus is first encountered. In this hall is where the first zodiac weapon, the Saggitarus Bow, can be found, and it's chamber entrance is behind a tapestry that can be passed through.

An elevator leads to this area where both Pit and Magnus will be taken outside once again. This location is where the Underworld Army sets a trap using a Treasure Box. 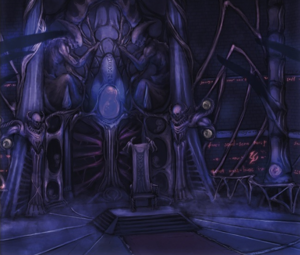 The Throne Room is the final area where the dark lord herself is fought. It's surrounded by numerous branching structures that make up the inner wall, while the outer walls consist of multiple lines of floating red symbols. Gaol's seat of power lies at the farthest edge of the room. This room also reappears in Chapter 23, The Three Trials. Here Mangus, Gaol broken from her curse and even Pseudo-Palutena are fought here.

Gaol's castle is rectangular in shape, but it is completely surrounded by a circular wall that has been built with large spikes jutting out of it. It also has multiple towers along its walls and the castle itself. The largest tower resembles a smokestack with a purple haze coming out of it, and is presumably where the portal to the Underworld is hidden. The castle only has one bridge connected to it, and is otherwise inaccessible without the ability of flight.