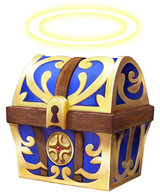 Treasure Boxes are special item containers that are spread throughout all of the locations that Pit visits on his journey in Kid Icarus: Uprising. They are decorated chests that open up when hit with an attack or just stood next to, and may contain useful items such as food, hearts, items, and even new weapons.

All Treasure Boxes have halos floating above them until they are opened, further signifying their importance. They are considered valuable and will therefore often be heavily guarded by enemies. In one instance, the Underworld Army even uses a Treasure Chest as bait to lure Pit and Magnus into a trap, although the latter was able to figure this out. Later levels will have more instances of empty traps that trigger enemies without warning. Other chests will attempt to move or jump away from Pit when he approaches them; shooting the chest will make it stay still long enough for Pit to open it. These types of chests are called Bouncy Boxes and Speedy Boxes.

Tiny Box, Speedy Box, and Bouncy Box
Tiny Boxes are smaller versions of standard Treasure Boxes. Speedy Boxes run around frantically to escape Pit, while Bouncy Boxes jump away from the angel to escape. Shooting them will cause them to stop temporarily. They are also identical to a normal counterpart in size and design.

Pandora's Box
Another type of Treasure Chest is called Pandora's Box, which has a more pink toning and a distinctive heart-shaped symbol. When opened the Pandora's Box will shoot blue fireballs at Pit, which can poison Pit. However, they occasionally drops a treasure. Like its name suggests, Pandora's Box is used both by Pandora and her human form, Amazon Pandora, as a trap in Chapter 22: Scorched Feathers.

Mimicutie
In addition, special enemies disguised as Treasure Boxes called Mimicuties will spawn female legs and rapidly attack Pit with a barrage of kicks. Their movement patterns from spinning rapidly around in circles, trotting along to go after Pit, and, the most formidable, dashing up to Pit suddenly and attacking him straight on. They are amongst the deadliest unaffiliated enemies around if not stopped instantly. As a rule, they tend to be slightly smaller than regular Treasure Boxes.

Treasure Box
These boxes aren't locked, so you can plunder them at will! You can spot a Treasure Box from a distance from the halo hovering over its lid.

Bouncy Box
Bouncy Box is a Treasure Box with a strange security feature: it jumps away whenever someone tries to open it! While this is known to jumble contents, it still makes the box a popular practical-joke choice.

Speedy Box
Speedy Box is a Treasure Box that runs away whenever someone tries to open it. This makes it a good way to protect treasure from thieves, and unfortunately, the treasure's owners. Shoot it to halt its escape.

Pandora's Box
Pandora's Box is in many ways the exact opposite of a Treasure Box. More often than not, these boxes are rigged with traps. But once in a while, they'll contain a pleasant surprise. If your health is low, it might be better to avoid them.

Standard Treasure Boxes appear in the 3DS-exclusive mode, Smash Run. They contain power-ups and items, but may also end up being Mimicuties.