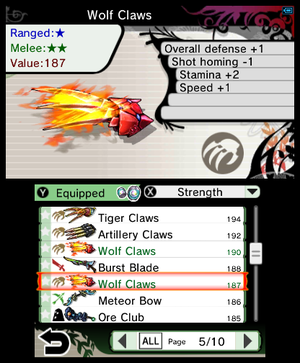 A selection of weapons during the "Fuse Weapons" option

In Kid Icarus: Uprising, players can access a large arsenal of weapons, from which one can be chosen before each stage or match. Every weapon has melee and ranged attacks, as well as charged and rapid fire attacks. Individual weapons also have different values and bonuses. Players can find more powerful weapons by playing the single player mode on higher difficulties. In addition, each weapon has a special attack that can clear the screen of most enemies, although they can only be used during flight. These attacks are represented by blue orbs at the bottom left of the touchscreen.

Players start the game with only a First Blade. Other weapons can be acquired through the following methods:

Most weapons are unlocked from the start, but others must be unlocked through one of the following means: 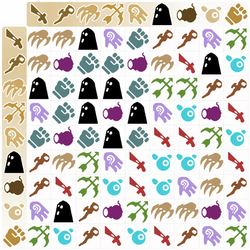 A fusion chart for the general class of a weapon 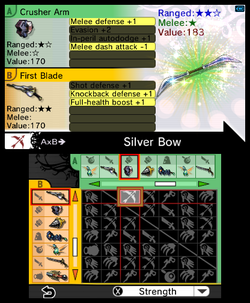 The fusion grid in game

Players can fuse two different weapons to form a new weapon. Gems can also be fused for the same purpose. Melee strength, ranged strength, and weapon modifiers are determined by the parent weapons, although not all will necessarily be preserved. The chart on the right is a simple reference to which types of weapons create what.

Certain exceptions to the above rules exist: 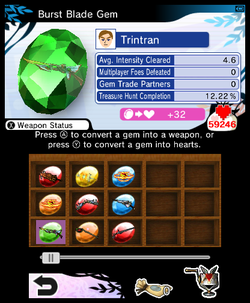 A collection of gems

Weapons gems are an alternative method of acquiring weapons. After creating a gem, they can be swapped with another player through Streetpass. Gems can be converted into the weapon displayed or they can be converted into Hearts, though converting a gem into a weapon will cost Hearts. The amount of Hearts needed to convert a gem into a weapon depends on the weapon value, and the color of the gem is also determined by the value.

Players could also receive gems through Spotpass, given by a Mii named Palutena, from the launch of Kid Icarus: Uprising until the service ended on March 31st, 2013.