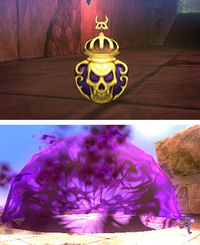 The Poison Cloud and its effect

The Poison Cloud is an item that makes an appearance in Kid Icarus: Uprising and billows a mist of poison after being thrown. The poison cloud can be used to inflict the poison status ailment upon a player or enemy. The Poison Cloud has quite a large radius, letting it be used to effectively harm players and enemies. The object comes from a noxious, lifeless swamp, and is contained within an urn like object with a menacing skull decorated on the front. It is an item mainly used in Together Mode, although some can be found in Solo Mode, most notably at the beginning of the Land Battle in Chapter 10.

Unlike most other held items, there is no icon image associated with the Poison Cloud.

"The magic mist that billows from this magic urn comes from a noxious, lifeless swamp. While it's not flashy, it has a wide range, and anyone who steps in its putrescent for will be assaulted by damaging toxins."