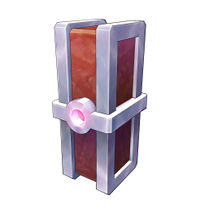 The Three Sacred Treasures Case as seen in Uprising.

Sacred Caskets hold the Three Sacred Treasures and have appeared in all three main games to date. Though the treasures vary slightly from the original to its sequels, the caskets themselves serve the same general purpose throughout the series.

The three Sacred Caskets all resemble a typical treasure chest or Treasure Chest, but they are quite tall and thin in terms of appearance. Every casket has a lock on it that keeps it shut until the three of them are brought together. In first two Kid Icarus games, they are red in-game, but the official artwork shows that the caskets are actually yellow.

The official artwork of the Sacred Casket from Kid Icarus.

The three Sacred Caskets first appeared in this game, each one containing the Arrow of Light, Mirror Shield, and the Wings of Pegasus. All three caskets must obtained before they can be opened, allowing Pit access to their contents. They are all won by defeating a boss in a Fortress. By the time all the caskets are achieved, the final battle is straight ahead.

The three Sacred Caskets return in this game and are also found in Fortresses, although this time one of them contains the Silver Armor rather than the Mirror Shield. Otherwise, they serve the same purpose as in the previous game, although they were intentionally given to the game's bosses by Palutena this time in order to test Pit's strength.

The item has been renamed as the Three Sacred Treasures Case, and a single case is featured carrying all three of the Sacred Treasures. The case along with its contents were stolen by the Space Pirates during the eighth chapter of the storyline, prompting Pit to go after them. In order to get it back, the angel will have to fight the dangerous Space Kraken at the end of the chapter.

The case, while having a minor role in the game, is still given a full idol and description. It is only briefly witnessed in Chapter 8's epilogue where Pit carries it with him to Palutena's Temple. It is basically a simple rectangular box with a grey casing and overall red cover. In the center is what appears to be a circular lock which opens the case, revealing the weapons within. For its small stature, the case surprisingly manages to hold the bulk of the treasures, lasting over 25 years with ease. When shaken, it makes a rumbling noise.

In Pit's first adventure, the Three Sacred Treasures were divided among Hewdraw, Twinbellows, and Pandora, hidden in their fortresses to rob Palutena of her powers. Yet despite years of conflict, their container has held up surprisingly well.