This article is about the location. For the chapter in Kid Icarus: Uprising, see Palutena's Temple (chapter).

Palutena's Temple, previously known as Palace in the Sky, is the central palace located in Skyworld and home of the eponymous goddess of light, and the starting location of Pit's missions. It is also where the Arms Altar is located.

Upon reaching the final area, Pit will automatically equip the Three Sacred Treasures, flying in a blazing trail to face Medusa herself. Before he can reach her, however, he must dispatch at least 50 foes (parts of Erinus do not count), or he will have to take another loop through the Palace again until an opening in the monstrous forces opens up, allowing access to Medusa herself. Pit will then proceed to battle. If the player lowers Pit to the bottom of the screen's blue clouds, he will automatically be bounced back to the center level of the screen. After Medusa is defeated, Pit flies into a small room where Palutena waits.

3D Classic: Pit's last mission against Medusa is against a backdrop of stars and clouds.

If Pit doesn't accumulate 50 kills by the time he passes halfway through the Zurees, the stage will reset from the beginning. Pit will know he's passed the check when the gold palace turns to red brick, then an enclosed purple hallway. It'll probably take 2-3 passes. Remember to collect the Hearts of the slain; new enemies of a type won't appear until the hearts disappear (because of the sprite limitations).

The Palace in the Sky serves as the final area again, but it is more of a maze this time. There are multiple paths to take, different enemies, and secret areas only found through the use of a Mallet. Stores, Hot Springs, and Sacred Training Chambers are also present here. Instead of finding Medusa at the end of the area, Orcos is there to serve as the final boss. He fights Pit in a small chamber similar to Medusa, but after he takes enough hits, he transforms into a giant too big for the screen, and possibly destroys much of the chamber to make room for his size. 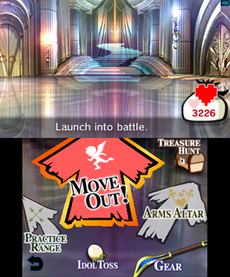 The main hub as it appears in Solo Mode.

The goddess's temple acts as the central hub area in this game, and is where most of the game's menu functionality occurs. Although the location provides numerous customization options for players, it cannot be freely explored like a typical hub area. Players can check out their progress in the Treasure Hunt, perform Idol Tosses, practice Air and Land Battle techniques, and check out current weapons. A section called the Arms Altar features many other options regarding weapons.

After Chapter 19, Viridi takes over Palutena's job and takes Pit into her temple. This feat changes the look of the temple the player is used to resting in since it is now in Viridi's Temple. No options are changed, but the overall layout has a different look. Viridi's Temple is covered in grass and many symbols seen in Palutena's Temple are now changed for Viridi's equivalent. The most notable switch is the replacement of the Centurion Strongarm with an Urgle. Pit regains his refuge in Palutena's Temple once Chapter 21 is completed. After the last chapter is completed, Pit can choose which goddess looks after him by entering the new Hidden Options menu on the Main Screen.

Move Out
This is where Pit goes through every time he begins a new chapter or repeats an old one. Venturing out of here takes him to the Chapter selection where the level and the Intensity are selected.

Treasure Hunt
The Treasure Hunt mode can be accessed to view all current Treasure Hunt panels and their respective unlockables. When a panel has been completed, on returning to Solo Mode you will be automatically taken here to view what you unlocked. The rewards range from Idols and Weapons to and Hearts.

Idol Toss
Idol Eggs obtained through battle in Chapters and Together Mode can be thrown in here replacing the one found in the Vault Menu. The functionality remains the same though. Once thrown and revealed, the Idol received can be examined by reading the information it comes with and the 360° three-dimensional view all Idols offer.

The Arms Altar contains a multitude of other options as explained above. Here, Pit can purchase items, fuse weapons and convert them for hearts. The purchase of items is in the hands of Palutena while the converting of weapons is left for a Centurion Strongarm / Urgle to do.

Gear
All weapons and Powers acquired are accessible from here. Powers can be swapped and altered and also auto-filled, while weapons can be (de)selected as favorites, analyze stats and tried out on a Land Battle area. The Gear option is also accessible through the Arms Altar and Practice Range.

Practice Range
Here, weapons can be experimented with in both Land and Air practice spaces. The Air section can only be accessed through here, while the Land section is also accessible by selecting a weapon and choosing "Try it Out". The Air Battle testing range features harmless Monoeyes and Komaytos while the Land Battle range features an immobile Monoeye in the center of a large circular platform.

This Skyworld temple is the starting point for Pit's missions. Palutena's Temple is surrounded by a powerful force field that protects it from enemy attacks. The size of this force field can be adjusted, although it gets weaker the further it's stretched. 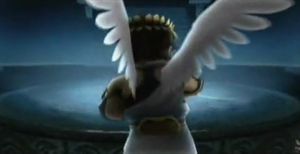 In this installment of the Super Smash Bros. series, Pit is seen within the palace in one of the cutscenes for the Subspace Emissary. He is initially observed watching Kirby and Mario fight through a magical pool, then Palutena later appears to give the angel his bow and orders him to help the other brawlers fight against the Subspace.

The temple as seen in SSB4.

A stage set on and around Palutena's Temple appears in Super Smash Bros. for Wii U. It is one of the biggest stages in the game, being even larger than Temple and New Pork City. Its large size makes it compatible for 8-Player Smash. The temple is divided into various areas with different themes, including the interior, fountain, and a tower.

Full transcript of all characters at SmashWiki: Palutena's Guidance

If the player uses Pit's down taunt quick enough while on the stage, it will trigger a conversation between Pit, Palutena, and Viridi about specific fighters, similar to Snake's codec calls in Super Smash Bros. Brawl. This mechanic, known as Palutena's Guidance, is very reminiscent of the in-game conversations in Kid Icarus: Uprising, going as far as to use the same expression artwork. Dark Pit takes part in his respective conversation, and Chrom from Fire Emblem: Awakening appears in the conversation about Robin.

NA Version: In the Kid Icarus series, Skyworld is where gods and angels live in harmony. Late in the story of Kid Icarus: Uprising, however, it falls apart, and the ruins of Palutena's Temple have become a stage to battle on. The bridge can be destroyed, splitting the stage in two, but you can still cross the gap using clouds or moving platforms.

PAL Version: In the Kid Icarus series, Skyworld is where gods and angels live in harmony. Late in the story of Kid Icarus: Uprising, however, it falls apart, and the ruins of Palutena's Temple have become a stage in this game. The bridge can be destroyed, splitting the stage in two, but you can still cross the gap using clouds or moving platforms.

Palutena's Temple is featured in the anime shots. It appears in Palutena's Revolting Dinner, but it has a vastly different appearance compared to the games. It has a more medieval castle style with fantasy elements opposed to the ancient Greek type of architecture commonly depicted in the series. The interior of the divine structure is also seen in Thanatos Rising where Palutena resides while she is helping Pit, and it is briefly observed in the beginning of Medusa's Revenge when Palutena is kept imprisoned by Medusa.