Symbol of the Forces of Nature

The Forces of Nature are an army of powerful nature-themed monsters that are led by Viridi, the goddess of nature who plans to destroy the human race. They are not affiliated with the Underworld Army, but plan to stop Palutena's forces knowing that the goddess of light will interfere in their plan to cleanse the planet of "human scum". Viridi's reason for wanting to destroy humanity is due to that she views humans as destructive and hateful beings who have no respect for their fellow lifeforms on the planet. Sick of their wars and mistreatment of nature, Viridi hopes to rid of the mortals with the army's ultimate weapon, the Reset Bomb, which harms only humans and can spread foliage and animal life, thus resetting the world anew into one without humans and leaving only plants and wildlife in its place. The symbol of the Forces of Nature is a stylized vine with a single large leaf. 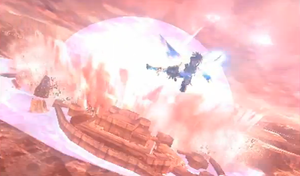 They first appear in Chapter 11: Viridi, Goddess of Nature, where their leader, Viridi, appears in the sky and launches a giant Reset Bomb that wipes out countless human armies in an instant. Pit makes his way through the newly created forest to find any survivors. Near the end he encounters Viridi's stone warrior, Cragalanche, which proves to be a tough opponent. Luckily Pit manages to defeat him. The Forces of Nature continue to be a threat to Palutena's Army in Chapter 12 where Viridi plans to launch another Reset Bomb, but once again the angelic hero stops it and then manages to take down the entire factory producing the bombs. In Chapter 13, Arlon, a servant of Viridi, and his Lunar Sanctum become a hazard as it could potentially be used as a destructive weapon to harm humanity. After Pit defeats Arlon, the sanctum is destroyed. In Chapter 14, Phosphora, another servant of Viridi, engages in a fierce battle against Thanatos and the Underworld Army. However, due to the intensity of the fight, Pit manages to easily defeat the lightning warrior. Afterwards, the Forces of Nature become less of an enemy towards Palutena's Army, and Viridi eventually becomes a helpful ally of Pit, which leads him to victory against the Underworld Army.

Dark Pit eventually joined the Forces of Nature as an officer after the defeat of Hades.

Major members of the Forces of Nature:

Technically not living members, the following still play an important role in the army: 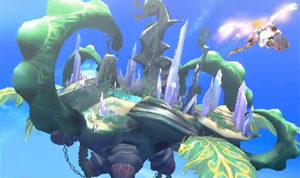 One of the bases of the Forces of Nature.

All of the army's troops are actually beings created from natural resources, such as dirt, wood, water and rocks to keep with Viridi's eco-friendly policy. Despite this they are all very strong and pose a serious threat. Viridi cares deeply for all her troops and considers them all her "children".