This article is about the army and its influence in the Kid Icarus games. For the Final Smash in Super Smash Bros. Brawl, see Palutena's Army (Final Smash). 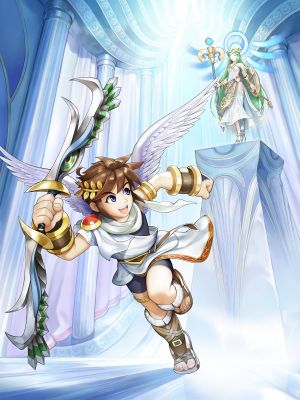 The two major members of Palutena's Army: Pit and Palutena

Palutena's Army is the protagonist army of the Kid Icarus games. They can be considered the only truly "good" army in the franchise as they are responsible for keeping humanity safe from all harm and maintaining the celestial balance. It is normally rated as the fifth army in the series, with the others being the Underworld Army, Forces of Nature, Aurum Fleet and the Human Army. Palutena rightfully owns this army, with the main character, Pit, being its captain. The Centurions, while not appearing in every chapter in Kid Icarus: Uprising, can be found in almost every level in the original games.

While being an important army in the series, the troops comprising it are actually quite minimal in diversity compared to other major factions. The following is a list of the members and their ranking:

Pit is a unique angel who, despite his inability to fly, is by far the most important and powerful soldier in the army. He used to fight with only the Palutena Bow, but now has an array of weapons to choose from.

The regular Centurions make up most of the army. They are all identical angelic beings who have wings allowing them to fly coming from their helmets. Their bows seem to possess an unlimited supply of arrows, their main strategy of attack. They are seen in every Kid Icarus game to date. The Centurion Knights, Strongarms, and Juggernauts are all new forces revealed in Uprising.

The Knights are an elite version of the regular Centurions, possessing shields and halberds instead of the bow and arrow.

The Strongarms strangely have no weapon, using their brute force to crush foes instead. While not very intelligent, Strongarms are possibly Palutena's most sought after troops (excluding Pit).

Juggernauts are inanimate cannons that shoot rapid stone balls at their foes. They can take quite a beating before being destroyed. They have excellent range and their continuous firepower makes up for their weak attacks. They are also able to throw explosive stones and require no controller and work by themselves. These troops can move horizontally while firing. They were created as a mean of defense after the Hewdraw attack in Chapter 3.

After Medusa imprisons Palutena, she turns all of the Centurions to stone. The Centurions can be freed by hitting the statues of them with a mallet. Once freed the Centurions will aid Pit in his battle. They can only be found in fortresses.

Instead of being solely in fortresses, Centurions can be found in most stages having been petrified as in Kid Icarus.

Pit's Final Smash in Super Smash Bros. Brawl has him summon Palutena and a large army of Centurions. The Centurions then attack enemies by ramming into them before falling to the ground. Palutena also appears in the Subspace Emissary where she tells Pit to go and help Mario after he is thrown into Skyworld by Petey Piranha.

Centurions once again appear with the role of assisting Pit as in past games. However their assistance must be found as is gained through an item called Centurion Assist. In Chapter 17: The Aurum Brain, Palutena calls the army to aid Pit by carrying him on a platform into the Aurum Brain Fortress. Between Chapter 18: The Ring of Chaos, and Chapter 20: Palutena'a Temple, the army becomes one of the main antagonists after Palutena's soul is controlled by the Chaos Kin. The latter turns Pit into a ring where Pit wakes up three years later, unable to remember what had happened to him. His body however, remains loyal to the possessed Palutena and has been attacking the humans over the time gap. In Chapter 18, Magnus, under Pit's control, must defeat Pit's Body and return the angel's soul to his rightful body. Later in Chapter 20, Pit must go against Palutena and must be careful to hit the Chaos Kin and not the goddess herself.

Pit and Palutena make an appearance in all trio of anime shorts, but the Centurions only appear in Palutena's Revolting Dinner.