Sinistew (ボワン Bowan) is a new enemy that appears in Kid Icarus: Uprising. 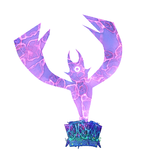 Sinistew appears to be phantom-like in nature, resembling a white silhouette with two arms, two pointy ears, and a single eye. It is also surrounded by plumes of steam, all of which are flowing out of a bubbling cauldron of liquid and gas. Sinistew's method of attacking include using its long arms in attempts to grab Pit, in which it will pull him into the box if successful. This will do some damage to the angel before he eventually is thrown by Sinistew flying out, even though struggling will help break free faster. Its close-ranged attack is attempting to slam one of its hands down on Pit. Sinistews are immune to ranged attacks, making melee attacks the only way of defeating them. There is also a cellular version, where the ghost section is a flowing purple and the pot is blue and transparent.

Cellular Sinistews (ボ細胞 Bo Saibou) are rare enemies, found only once or twice in the land battle of Lord of the Underworld.

Sinistew
A murky Underworld genie who resides in a pot. But this genie doesn't grant wishes—he just tries to drag passerbys into his lair! The pot contains a one-dimensional universe—those pulled into it are rarely seen again.

Cellular Sinistew
This cellular version of the Underworld Sinistew guards Hades's Belly from intruders. Like their counterparts, Sinistews hide in vessels that can only be damaged with melee attacks.