Heads of the Hewdraw is the third chapter in the main storyline of Kid Icarus: Uprising. It features the return of Hewdraw, who has grown two additional heads and a much larger body during its years of absence. This mission has Pit returning to Skyworld after Palutena tells him that it is being attacked by the Underworld Army. The rest of the chapter features an unnamed town in the middle of a vast grassland that resides on the edge of a massive lake. This area also features a variety of strange enemies, such as Komayto and Specknose.

The first part of this mission has Pit flying through Skyworld and defeating numerous enemies that plague the area. He states that the best way to repel the army would be to attack the leading force, who Palutena reveals to be Hewdraw. The beast is now capable of flight and with two additional heads, it should be more powerful than it was in the past. As it turns out, however, the multiple heads prove to be more of a burden than anything else to Hewdraw, as they all begin to argue with each other when Pit prepares to attack.

Once their bickering ends, the first part of the battle against Hewdraw takes place. Hewdraw's three heads will each take turns attacking Pit during the battle. They have a variety of projectile moves at their disposal, including fire balls, bolts of electricity, and powerful laser beams that move across the screen. On certain occasions, one of the heads may lung out and try to bite Pit, an attack that can be rather difficult to avoid. Hewdraw can also charge a very powerful flamethrower attack that must be avoided by moving to a far part of the screen. After causing enough damage to one of the heads, it will fall off, leaving the other two to attack. This process must be repeated with a second head, before Palutena blasts the third head and body with a powerful beam attack, which she dubs the "Sacred Goddess Clobberlaser" or the "Glam Laser". It is also possible to defeat Hewdraw before the laser is unleashed. Pit then must proceed to finish off the other two heads, which are still alive and terrorizing a town below. 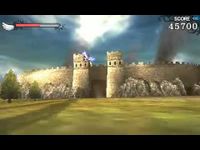 As Pit makes his way to ground level, he will bear witness to the destruction being caused by the remaining heads to the once peaceful town. Palutena takes him beyond the town's walls, where it is also being attacked by Underworld forces. Some new enemies will be encountered here, including Stackjaw and Mega Mussel. The latter creature is particularly challenging as it has multiple weak spots spread around its rotating body in the form of pearls, all of which must be destroyed to defeat it. Pit will have to fight his way through the town, encountering one of the other Hewdraw heads in the process. He will then have to make his way through a well to find a passage to the lake.

The second battle is the easiest, and takes place in the center of the town. The Hewdraw head is very limited when it comes to attacks, and will mostly bounce around trying to bite or crush Pit. After the second battle, Palutena will tell Pit that the third head is near the town's lake attempting to revive its body.

The first Intensity Gate requires a difficulty setting of at least 4.0 and lies near the area where Pit begins his ground mission. It leads back to the landing spot, but also has a Treasure Chest and a Souflee that appears along the way.

The second Gate requires a much higher 7.0 setting and contains another Treasure Chest guarded by two Wave Anglers. It is found directly after the battle with the second Hewdraw head.

The final battle with the violet head.

The third Hewdraw head is encountered at the lake outside of town. It has used the healing waters to grow a whole new snake-like body to battle Pit with. Now more ferocious than ever before, Hewdraw intends to prove that its one head is better than three.

This is by far the toughest battle of the mission, and Hewdraw now resembles its classic form from the original Kid Icarus. Without its other heads to hold it back, Hewdraw is now much faster and attacks from the lake. It moves through the water and uses many of its previous attacks, along with a few new ones. Occasionally, Hewdraw will dive under the water and stay there, forcing Pit to shoot orange balls of light to bring him out of the water, while trying to avoid homing rocks. Eventually, Hewdraw goes down.

This chapter is unique as it has three different endings depending which head is first defeated in the aerial battle:


Blue Hewdraw
He makes a final vain comment that he is too pretty to die.

Violet Hewdraw
Just moments before dying, he will compliment Pit for coming so far and that he is proud of the angel, leaving Pit surprised at how nice the Underworld beast was.

Purple Hewdraw
He claims that he has some last words to say before his death, but dies abruptly before he can finish, leaving Palutena curious on what he was going to say.