The War's End is the twenty-fifth and final chapter in the storyline of Kid Icarus: Uprising. It's an exclusively aerial stage, entirely composed of the final battle against Hades and includes the true credits sequence upon defeating the mighty god. The overall final battle is split into five distinct parts.

At the start of the chapter, Pit activates the Great Sacred Treasure and flies through the Underworld to seek Hades, with both Palutena and Viridi watching the battle with great anticipation. After effortlessly eliminating hordes of Underworld troops with the powerful Sacred Treasure, Hades jumps out of the ground and the battle begins. Although he executes many powerful cinematic attacks, the Great Sacred Treasure will automatically assist in dodging these moves, while Pit's focus is on the individual projectiles he launches with his cape and hands. Hades eventually spawns a nearly unavoidable twister by spinning rapidly, before quickly sprinting after the angel while unleashing more projectile attacks. After beating Hades, he will attempt to crush Pit with his foot, only to miss and launch himself back towards the Overworld thereafter. The Great Sacred Treasure proceeds to transform into Pursuit Mode and gives chase.

After Pit catches up to Hades, the Underworld leader will introduce his "devastation ensemble" of laser turrets that appear all over his legs, which must be destroyed. The battle then moves to his cape, where he spawns more turrets that resemble his "lovely visage". Hades' main weakpoint here is the purple circular object at the top of his cape, which must be shot at to cause him any more harm. Upon damaging this object enough, Hades will turn around and launch a barrage of lasers at Pit, causing damage to the Great Sacred Treasure as it transforms into its Mech Armor Mode. The battle then moves to the god's upper body.

During this part, more laser turrets appear on Hades that must be shot at and destroyed. He will then summon a portal on his hand that causes a force of suction while he fires blue shots from his eyes. After destroying this portal, he will repeat the same attack with his other hand, which must be dealt with in the same way. The battle then moves to his chest, where more turrets appear that shoot lasers at Pit. Hades' weak-point here is the gash that Dark Pit left behind when he rescued Pit with the Lightning Chariot during Chapter 23. The yellow shield defending this weakness must be destroyed before the gash itself can be attacked. Upon causing enough damage to this area, Hades will quickly grab Pit and attempt to drill his armor off. Before he could do so, however, the top portion of the Sacred Treasure detaches from the rest of its body and slices Hades in half with a giant plasma sword. The Great Sacred Treasure then changes into Ultralight Mode. They both make it to the Overworld and land near a town, where Hades regenerates his legs, much to Pit's surprise.

For this part, Palutena warns Pit that the blue projectiles launched by Hades must be shot at, while Viridi tells him to avoid attacking the smaller purple projectiles (as they will cause unavoidable damage if hit). In addition to these attacks, the Underworld god will occasionally unleash a barrage of energy shields, one of which is usually red and launches fire-based projectiles that home in on Pit. Hades' new weak-point is the gem located just above his regenerated legs, which must be shot at while avoiding all of his other dangerous attacks. Once he is defeated, Pit attempts to deliver the finishing blow, but Hades disappears before he can reach him. He then reappears and quickly smashes the Great Sacred Treasure between his palms. Now completely defenseless, Pit begins falling back down to the surface world and must be controlled to land on the target reticle below him.

The angel will land on the ground as Hades prepares his most powerful attack just for him. During this time, Palutena senses a powerful force seeking Hades, and instructs Pit to keep the aiming reticle on the god by continuously sliding it towards him. If successful, this will reveal a revived Medusa as the force, who defends Pit from Hades' attack by crushing his head in. Claiming that she has grown annoyed with Hades constantly reviving her to use as his puppet, Medusa attempts to attack a second time, only to be quickly destroyed by him once again, stating "I am your master and I will revive you as many times as I please", after regenerating his head, which now resembles a hitodama or a Will-o'-the-Wisp.

Shocked at this turn of events, Pit grabs the main cannon from the remnants of the Great Sacred Treasure while Viridi grants him the Power of Flight once again. This final part consists of Pit avoiding two continuous laser attacks from Hades' hands, as well as one that occasionally launches from his head that follows the angel. During this time, he must wait for the cannon to fully charge before he can launch the finishing blow on Hades. Upon doing so, the powerful blast from the weapon will obliterate the Underworld lord once and for all.

With Hades finally defeated, the people of the nearby town begin to celebrate as Pit flies above the area in victory. Before he can enjoy his moment, however, Viridi interrupts and states that they're back to the real problem, humans. She says that it's true that Palutena says that humans are the closest, she can be real sap sometimes, and asks Pit why he cares so much about that. Pit explains to Viridi that humans are the only living creatures with faith and devotion, meaning that only humans believe in gods, and respect gods. Viridi states that Pit is not a god, and asks him if he's saying that only believers deserve protection. Palutena tells Viridi to let Pit enjoy his moment in the sun, and that he saved everyone, not just humans. Viridi then asks if the only point of faith and devotion is getting greedy wishes granted by the gods. Pit tells her that that's one way of looking at it, before he is distracted by Dark Pit flying alongside him, having been granted the Power of Flight by Palutena. Viridi tells Pit to pay attention to her, and asks Palutena if she's learned anything. Palutena says that it's true that humans are selfish creatures who are driven by greed, while also pointing out that the gods are no different. Pit laughs, stating that no one could be as selfish as the gods. Viridi mimics Pit's laughter, stating that she's done here, and that they can have their happy ending as Pit and Dark Pit fly into the sunset. 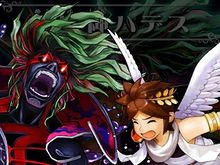