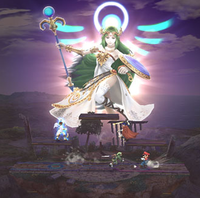 For the Final Smash, as soon as the special move button is pressed, Pit will yell "All troops! Move out!" Once this happens, a huge, still image of Palutena will appear in the background. Centurions will then begin to fly in from the sides of the stage, and charge at all opponents of Pit. These Centurions inflict 15-25% damage each, with good knockback. However, these Centurions can be shielded, or directly killed. Regardless of whether or not the Centurions strike its target, it will lose its wings and plummet as soon as they finishes their task.

A Centurion in Brawl.

In all three Kid Icarus games, Palutena is known for owning an army of troops, mainly consisting of Centurions.

In the original Kid Icarus, Pit could find Mallets throughout Fortress levels, and use them to break open statues placed around the area, freeing the Centurion trapped inside. When Pit reaches the boss chamber at the end of the level, any Centurions that he rescued will immidiately fly in and attack the boss, all at once. The concept for Palutena's Army is based upon these Centurions all rushing in at once to attack.