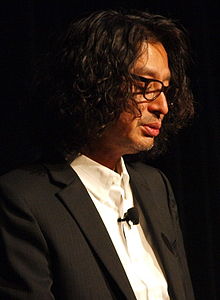 Yoshio Sakamoto at the Game Developers Conference in 2010.

Yoshio Sakamoto (坂本 賀勇, Sakamoto Yoshio) is a Japanese video game designer who works for Nintendo. Sakamato is well known for his work on the Metroid series, and has directed most of the Metroid games. Regarding the Kid Icarus series, he notably helped contribute the development of the original Kid Icarus with Toru Osawa.[1] Sakamoto is also well known for working on games such as Super Smash Bros. Melee, Wario World, and WarioWare: Smooth Moves.

Sakamoto was born on July 23rd, 1959 and claims to have grown up with Nintendo toys.[2] After coming out of art college, he was hired by Nintendo in 1982. Sakamoto has continued working with the company ever since.