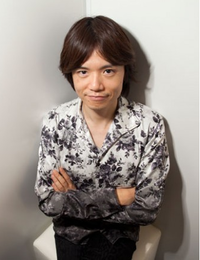 Masahiro Sakurai (桜井 政博, Sakurai Masahiro) was born on August 3, 1970 in Tokyo, Japan. He is a well known Japanese video game director and designer, most famous for the Kirby and Super Smash Bros. franchise. He previously worked for HAL Laboratory, a subsidiary of Nintendo. He left the company in 2003 and started his own company called Sora Ltd. In 2009 after the huge success with Super Smash Bros. Brawl, he returned to Nintendo and created a joint subsidiary called Project Sora. Sakurai recently worked on Kid Icarus: Uprising, the long-awaited sequel to the Kid Icarus game.