The Dark Pit Staff is one of the twelve Staffs in Kid Icarus: Uprising. It is most powerful when firing at far away foes. As its name states, it is designed after Dark Pit and was created alongside him.

Staff used by Dark Pit when he hides in Chapter 6. The staff's charged shot does four times the damage at its longest range as it does up close. Continuous fire is also powerful but lacks size and range. 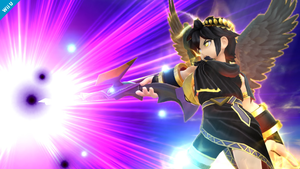 The Dark Pit Staff in Super Smash Bros. for Wii U

The Dark Pit Staff appears as Dark Pit's Final Smash in Super Smash Bros. for Nintendo 3DS and Wii U. He fires a high-powered shot that travels in a straight line. It can hit multiple opponents and can even penetrate through walls. This move works very similarly to Zelda/Sheik's Final Smash, the Light Arrow. The staff also appears on Dark Pit's main render and in one of his victory poses. Design-wise, the staff noticeably lacks the blue, floating spherical structure on the top that was present in Uprising.

This weapon may be called a staff, but it actually does better shooting powerful shots at targets at long range. Like Dark Pit, this staff was created by the Mirror of Truth. If Pit were to use it, he'd probably feel lingering echoes of his clone's warped personality. 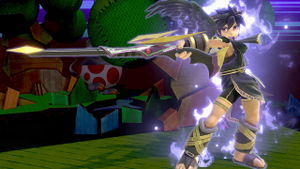 The Dark Pit Staff returns as Dark Pit's Final Smash, functioning very similarly as before. The weapon is also again featured on Dark Pit's primary render, and in one of his victory poses.