The Viridi Palm is a Palm in Kid Icarus: Uprising. It is one of two weapons dedicated to the goddess of nature, the other being the Viridi Claws. The palm is decorated with hearts and leaves and even features Viridi's face when the weapon is not in use. It is unlocked by acquiring five palms. 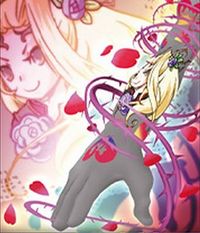 Artwork depicting the Viridi Palm in use.

Created by and requiring total devotion to Viridi, this palm excels at landing consecutive hits, with the damage it deals depending on where it strikes the target. Shooting from a distance will help improve its accuracy.

* Charged shots do a series of rapid hits, decreasing in damage by approximately 9% per hit. Damages shown are those of the first hit.