Staffs have long attack ranges with shots that generally get stronger the farther they travel. They're weak in melee combat, however. The Insight Staff is a well-balanced choice for learning this type of weapon. 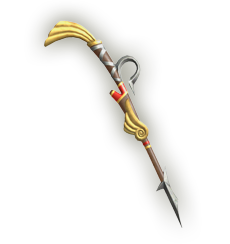 Artwork of the Staff in Super Smash Bros. Ultimate

The Insight Staff, simply called "Staff", appears as an item in Super Smash Bros. Ultimate. It is a long-range weapon, capable of shooting opponents from across the stage. It deals more damage to those farther away from its wielder.