Jump Glide is a Power in Kid Icarus: Uprising. Jump Glide can be used in both Solo Mode and Together Mode. 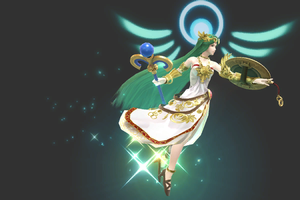 Icon for Jump Glide in Super Smash Bros. for Wii U

Jump Glide acts as an improved Sky Jump. Like with Sky Jump, Jump Glide will send the player character into the air, though they are then able to glide forward for a short time, being able to adjust their decent as well. When in the air, the player can still use their equipped weapon's ranged abilities, but any other selected Powers will not activate until they return to the ground. The distance the character can travel also depends on their speed, though the jump height never changes. The player cannot use melee attacks in the air.

Jump Glide is also one of Palutena's selectable Up Special moves in Super Smash Bros. for Nintendo 3DS and Wii U. When used, Palutena will jump into the air and will be able to glide around for a short time. The jump height is a small hop when used on the ground, but is a high leap when used in the air. The effect does not last long, and Palutena will enter a helpless state and fall if she is still in the air when the Power runs out, attacks, or if the player presses down.