Mega Laser is a Power in Kid Icarus: Uprising. Mega Laser can be used in both Solo mode and Together mode. 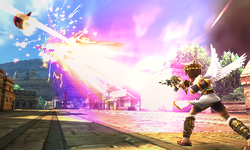 Black Hole Laser in Super Smash Bros. for Wii U

When activated, Mega Laser will fire a large laser in the direction of the player's reticle. The laser is large enough that is able to reach the Monoeye in the Practice Range from one end, which is 150 meters away. Any enemies caught in the laser will take 4 points of damage repeatedly for about four seconds, with the last hit being 8 points of damage, totaling 100 points of damage should every hit connect. The player can activate other Powers while the Mega Laser is active.

Mega Laser appears in the Super Smash Bros. series combined with Black Hole for Palutena's Final Smash, Black Hole Laser. After trapping opponents in a Black Hole, Palutena sends a Mega Laser through it, repeatedly damaging the opponents before launching them. The laser can be angled slightly to adjust the knockback angle and possibly hit anyone who was not trapped in the Black Hole.