Autoreticle is a Power in Kid Icarus: Uprising. Autoreticle can be used in both Solo mode and Together mode. 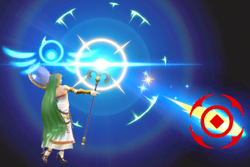 When active, Autoreticle will move the player's reticle to the nearest enemy when attacking. If no enemy is on screen, the reticle does not move on its own. Trying to use a ranged attack when next to an enemy will cause the character to use a melee attack on the enemy. The Autoreticle power lasts for about 30 seconds.

Autoreticle also appears as Palutena's default Neutral Special Move in Super Smash Bros. for Nintendo 3DS and Wii U and as her only Neutral Special Move in Super Smash Bros. Ultimate. When used, Palutena holds up her staff to target a character in range. If an opponent is in range, she will fire three energy blasts that do about 2.9% damage each. If no opponent is in range, Palutena puts her staff back down without firing anything.