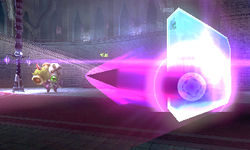 When activated, the player character will place a large reflective barrier in front of them. The barrier will reflect enemy projectiles back at them. Enemies who contact the barrier itself will take 1 point of damage. While it does not stop physical attacks, it does act as a sort of wall, making it difficult for enemies to move through. Enemies can stand on top of the barrier, however.