Super Speed is a Power in Kid Icarus: Uprising. Super Speed can be used in both Solo Mode and Together Mode. 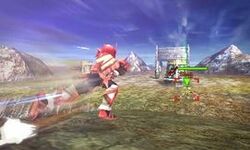 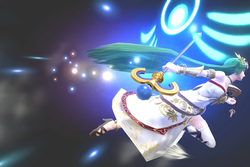 Icon for Super Speed in Super Smash Bros. for Wii U

When activated, Super Speed will cause the player character to dash quickly in the direction the camera is facing. The dash lasts for a few seconds, but is enough to cover over half of the field in the Practice Range. Any enemies that are in the way of the dash will also be damaged, taking 20 points of damage on impact. Any attacks the player uses will be Dash Attacks. The player will not be able to stop their character from running, but they can turn their character slightly. The dash does not consume Stamina. The player cannot use any additional Powers while Super Speed is in effect.

Super Speed is also one of Palutena's selectable Side Special moves in Super Smash Bros. for Nintendo 3DS and Wii U. When used, Palutena will move quickly in the direction pressed, moving forward regardless of player input. Unlike in Kid Icarus: Uprising, Super Speed will only last about a second, though the player can press the opposite direction Palutena is dashing in to make her stop. It also takes about three seconds for the move to be useable again. If Palutena collides with an enemy, they will take minor damage, ranging from 1% to 11%, depending on how far Palutena traveled, with more distance equaling more damage. If Palutena jumps during the dash, her jump distance will be increased, but the move will immediately end. Using an attack while Super Speed is in effect will immediately end the move. When used on the ground, Palutena will stop at ledges. Using the move in the air will cause Palutena to fall downward quickly. Super Speed is fast enough to outrun Sonic the Hedgehog, the fastest character in the game without additional boosts.