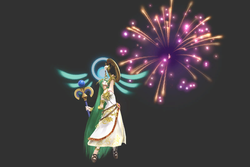 Icon of Celestial Firework in Super Smash Bros. for Wii U

When activated, the Power will launch a firework 13.4 meters away from the user. While Celestial Firework is meant to be more of a fun gimmick than a useful Power, it does deal 10 points of damage to enemies in range.

Celestial Firework is also used as one of Palutena's Down Special moves in Super Smash Bros. for Nintendo 3DS/Wii U. When used, a firework will be launched at Palutena's feet, carrying an opponent into the air and then launching them. The attack does not do a lot of damage, but does make Palutena invincible for a short time.