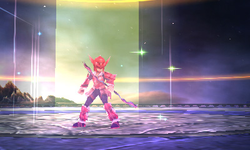 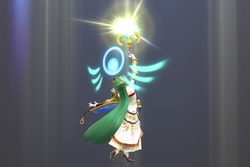 Icon for Heavenly Light in Super Smash Bros. for Wii U

When activated, a beam of light will appear around the character, surrounded by large halos of light in a radius of about 10 meters. Any enemies in this radius will take a repeated 3.6 points of damage over the span of about eight seconds. If all damage connects, an enemy can take a total of 72 points of damage. The player is also able to move around during this time, damaging multiple enemies as they progress. However, enemies are not stunned by the damage and Heavenly Light does not act as a protective shield from attacks.

Heavenly Light also appears as one of Palutena's Neutral Special Moves in Super Smash Bros. for Nintendo 3DS and Wii U. When the Special Button is tapped, Palutena calls down a rain of light beams around her that lasts a second. If the button is held down, the beams will last for about four seconds or until the button is released. Any enemies in these beams will take a repeated 1% of damage as long as they remain in the light and be pushed out of the field a little, but do not receive any knockback. Unlike in Kid Icarus: Uprising, Palutena is not able to move around or use other abilities while Heavenly Light is active, leaving her open to attacks. During Smash Run, Heavenly Light can be randomly applied to players, though they are able to still move around during the event.