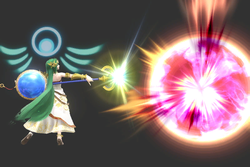 Explosive Flame in Super Smash Bros. for Nintendo 3DS and Wii U

When activated, the player character will launch an explosive blast at the ground 10 meters away from them in the direction of the reticle. The blast is always aimed at the ground, the reticle's position does not effect the angle of the throw. Once deployed, the blast will quickly grow in size, covering a radius about 8 meters wide. Any enemies caught inside the blast will take repeated 3.6 points of damage until the blast subsides, at which point the enemies will be left with a Burn status. Overall, an enemy can take a total of 145 points of damage if every hit connects. The player can only use one Explosive Flame at a time.