Angelic Missile is a Power in Kid Icarus: Uprising. Angelic Missle can be used in both Solo Mode and Together Mode. 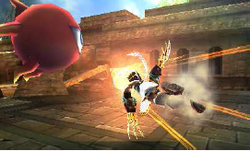 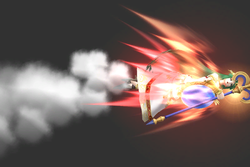 Icon for Angelic Missile in Super Smash Bros. for Wii U

When activated, Angelic Missile will launch the character directly forward in the direction the reticle is positioned, about 35 meters when standing or 45 meters when dashing according to the Practice Range. If the character makes contact with an enemy during their launch, the enemy will be damaged, with the amount of damage taken depending on the distance it took for the character to reach them. Using the power directly next to the enemy will have them take 80 points of damage down to about 44 points of damage at the end of the launch. Once the character reaches the end of the launch, they will collapse onto the ground which they are able to roll and get up from, and will not damage an enemy when falling. During the launch, the player will lose control over their character.

Angelic Missile is also one of Palutena's selectable Side Special moves in Super Smash Bros. for Nintendo 3DS and Wii U. When used, Palutena will launch in the direction pressed, her total travel distance being a little over halfway of Final Destination. The move will deal 13% of damage to an enemy when the move is active, signified by a red glow as Palutena travels. The move can also be used to help with recovery, as it will not put Palutena into a helpless state, and it can also be used indefinitely in the air. However, it has a slow start up that can leave Palutena open and cannot be stopped by player inputs.