Warp is a Power in Kid Icarus: Uprising. Warp can only be used in Together Mode. 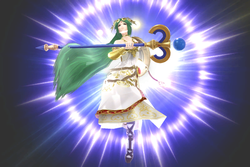 Warp in Super Smash Bros. for Wii U 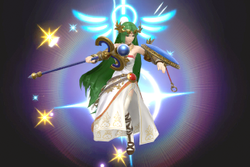 When activated, Warp will send the character to one of the respawn points on the map at random. This makes the Power an excellent escape tool and can be used to remove themselves from any predicaments.

Warp is also one of Palutena's selectable Up Special moves in Super Smash Bros. for Nintendo 3DS and Wii U, being the one she starts with at default, and her only Up Special move in Super Smash Bros. Ultimate. When used, Palutena will disappear and reappear a second later. Where Palutena warps to depends on the direction the player moves the Control Stick in. Palutena cannot be attacked while Warp is active, but she will immediately enter a helpless state once it is finished if she is not on the ground.