From Icaruspedia, the high flying Kid Icarus Wiki
(Redirected from Sacred Bow of Palutena)
Jump to navigation Jump to search 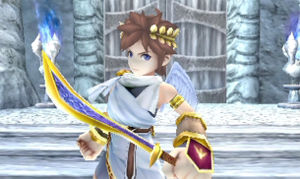 Pit with the Palutena Bow in Kid Icarus: Uprising

The Palutena Bow, also known as the Sacred Bow of Palutena[1](パルテナの神弓 Parutena no Shinkyū), is a Bow created by the goddess of light herself. It is Pit's signature weapon since its first appearance in Super Smash Bros. Brawl. It made its first debut in the Kid Icarus series as an unlockable weapon in Kid Icarus: Uprising, and can be obtained by completing Chapter 24 in less than 11 minutes. Its prototype is the Silver Bow.

Painstakingly crafted by Palutena herself, this bow's shots gain speed the farther they travel. Though its standing shots are weak, its dash shots are mighty. So keep moving, and don't leave yourself open to counterattacks! 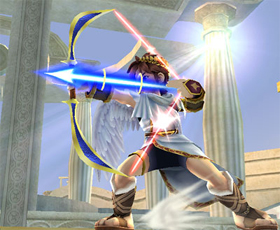 The Palutena Bow in Brawl.

Pit is first seen using this bow as his weapon in the third instalment of the franchise. His standard special allows him to fire the Palutena's Arrow. According to the trophy information, Pit received this bow some time after he defeated Medusa in the original Kid Icarus, which is shown in one of the cutscenes of Subspace Emissary.

The bow Pit got from Palutena after the Medusa incident. As a standard bow, it's capable of firing arrows of light that can change direction. It can also be split to form two short swords—Pit holds one sword in his right hand in a standard grip and one in his left in a reverse grip. He may hold them like this so he can shift between bow and swords without losing a beat.

The Palutena Bow in the Wii U version.

Once again, Pit uses the Palutena Bow as his main weapon. The bow appears to be slightly larger with broader blades compared to its appearance in Brawl and Uprising, but still functions similarity as they did in the previous Smash Bros. title.

A bow crafted by the goddess Palutena herself. It is said that one night, as Palutena was caring for this bow, the moon's light formed a beam and fell upon it, blessing it with power. A legendary weapon like this requires skill and training to wield effectively.