From Icaruspedia, the high flying Kid Icarus Wiki
(Redirected from Arlon the Serene)
Jump to navigation Jump to search

Arlon (アロン Aron), is a new character introduced in Kid Icarus: Uprising. He is a lunar being that lives inside a giant mechanical moon called the Lunar Sanctum. As an ally of Viridi, he shows hostility towards Palutena's Army. Arlon first appears during Chapter 13: The Lunar Sanctum as the chapter's boss.

He is a very tall, lanky, elderly-looking being who stands around 260 cm (8'6")[1]. Arlon has lavender-colored skin and gray hair that ends in three points that face upward, and a mustache that is quite long that points away horizontally. He wears very formal yet somewhat futuristic-looking attire that resembles a black suit with golden clasps and a golden broach below his neck. He also wears elaborate white gloves that release purple flames, fancy pointy shoes and a gold-framed monocle on his left eye. His overall appearance makes him resemble a butler.

He is generally a very suave and intelligent gentleman with a strong sense of honor for Viridi and the Forces of Nature. His honor goes as far as only allowing Viridi to negotiate all possible battle plans. However he does prefer non-violence, preferring that he and Pit just sit down for a chat instead of causing chaos in his sanctum. He is very formal in manner and will even address his enemies by proper honorifics. Such as he always refers to Palutena as "Lady Palutena", and Pit as "Master Pit". However, the PAL trophy description from Super Smash Bros. for Nintendo 3DS hints a more vicious side to him, indicating that his gentleman-like behavior may be merely a facade for his true nature.

Although Arlon has displayed strong loyalty and allegiance to Viridi, it is unknown if he shares the same misanthropic views as her as he has never spoken his opinion regarding humans. But seeing as he is a servant of the goddess of nature, it's likely he either also hates humans or is completely indifferent towards them.

He has a wide array of darkness based powers but primarily uses psychic abilities like levitation, blacking out his surrounding area, and using an arsenal of projectiles. He is also a skilled hand-to-hand combatant, having a wide array of physical attacks. He can produce an infinite source of energy from himself to fuel his gigantic Lunar Sanctum and he has omnipresent control over the entire structure's terrain, movement and weapons. He also created the Lunar Sanctum himself showing a great deal of mystical and technological prowess. Like the other heavenly beings, he can communicate telepathically with others. 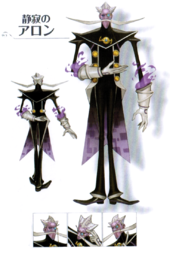 Transparent variant of his artwork.

Arlon makes his appearance in Chapter 13, where Pit heads towards his Lunar Sanctum to destroy it, as Palutena believes the Forces of Nature plan to use it to attack the humans. Arlon quickly intercepts Pit and Palutena's conversation, letting them know that he will defend himself against them, but wishes to handle this more civilly. However, since Viridi is the only one allowed to handle negotiations within the Forces of Nature, Pit and Palutena have no choice but to break into the Lunar Sanctum and defeat Arlon who is using his powers to fuel the structure. After much struggle and verbal clashes between Arlon and the heroes, Pit finally makes it to his domain where the battle soon commences. Arlon proves to be a powerful fighter of great skill whose powers leave Pit blinded many times, but in the end Pit manages to overcome this and deal the finishing blow to Arlon, cutting off his power to the Lunar Sanctum, thus destroying the celestial base. However as the Lunar Sanctum breaks apart, the Chaos Kin escapes from its interior.

He is later briefly mentioned by Viridi three years later in Chapter 20, where she says that she does not blame Pit for Arlon's defeat as he was just trying to do what he had to. She refers to him in the present tense, which hints that he was likely revived by Viridi at some point after his defeat by Pit.

Master of the Lunar Sanctum and a commanding officer of the Forces of Nature. Arlon styles himself as a reticent butler, discreetly working from the shadows to serve his goddess, Viridi.

Arlon is a collectable trophy in Super Smash Bros. for Nintendo 3DS.

NA version: A suave commander of the Forces of Nature. Arlon resides within the Lunar Sanctum. Compared to Viridi, he is very tall. You could say he has the ear of Viridi, but he has to lean down pretty far to reach it. Despite his refined appearance, Arlon is capable of holding his own in combat.

PAL version: One of the leaders of the Forces of Nature, and master of the Lunar Sanctum. Refined and keen on formality, he styles himself as a butler, but he has a hidden quality to him that's rather...vicious. So much so, that apparently the opposing Underworld Army even tried to recruit him!