From Icaruspedia, the high flying Kid Icarus Wiki
(Redirected from Twinbellows the Ferocious)
Jump to navigation Jump to search

Twinbellows (ツインベロス Tsuinberosu), is a large, two-headed dog that is a recurring boss of the Kid Icarus series. Its body is engulfed in flames and is the very first boss that Pit faces in the series. It is referred to as "the Underworld's faithful watchdog".

Twinbellows is a large, demonic dog that lives within the dark caverns of the Underworld. In Kid Icarus, it was bright red in color, with yellow spikes running along its back (which are missing in its artwork). It also had a fiery mane, which was not visible in-game. In Kid Icarus: Uprising, its body is darker red, with much of its fur engulfed in flames. It is shown that the beast was formerly chained down since it has a large, metal brace with a broken chain attached to its left paw. Both of its heads also wear similar-looking spiked collars with chains dangling down from them. In addition, Twinbellows wears bone armor along its back, with funnel-like spouts that shoot flames running along its spine. 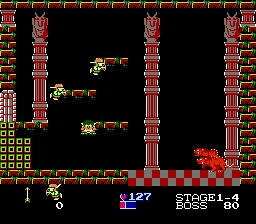 In the first Kid Icarus, Twinbellows is the Gatekeeper of the Underworld Fortress and the Three Sacred Treasures' Sacred Casket that lies within. Twinbellows travels slowly, spewing fireballs at Pit; these fireballs generally pass overhead and Pit's opening to attack is when Twinbellows is readying another shot.

The Gatekeeper of the Underworld fortress. A devil dog with two heads. Its body is wrapped in fire, and spits out bullets of magma energy. 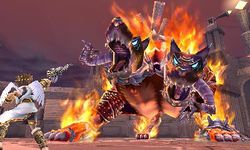 In Kid Icarus: Uprising, Pit fights Twinbellows in a colosseum within a town of the first chapter, The Return of Palutena. Twinbellows is much larger compared to its previous appearance, and reprises its role as the first boss of the game. Its attacks include a swipe, a charge (if this misses, it is stunned for a moment from the collision with the colosseum wall), and various fire breath attacks.

A false copy created by Medusa appears in Medusa's Final Battle as one of the midbosses along with Hewdraw and Pandora. It attacks similarly as it did in the first chapter.

A two headed dog (hence the name) that guards the Underworld. Medusa unleashes Twinbellows during an assault on a human city, using magic to supersize the bicephalous puppy. But, for Pit, the louder they bark, the harder they fall.

Twinbellows appears as a boss in a Kid Icarus challenge in NES Remix 2.

NA Version: Twinbellows is a flame-engulfed, demonic, doglike beast unleashed by Medusa during her attack on a human city. Its roar heralds a crimson fire that consumes everything in its path. If you hear both heads roaring, prepare yourself—this beast is definitely drawing near.

PAL Version: Unleashed by Medusa during an assault on a human city, the Underworld's fiery guard dog is a fearsome creature. People associate the sound of its roar with the sight of cities being burned to the ground. If you hear two roars at the same time, stay on your toes - it might be nearby.